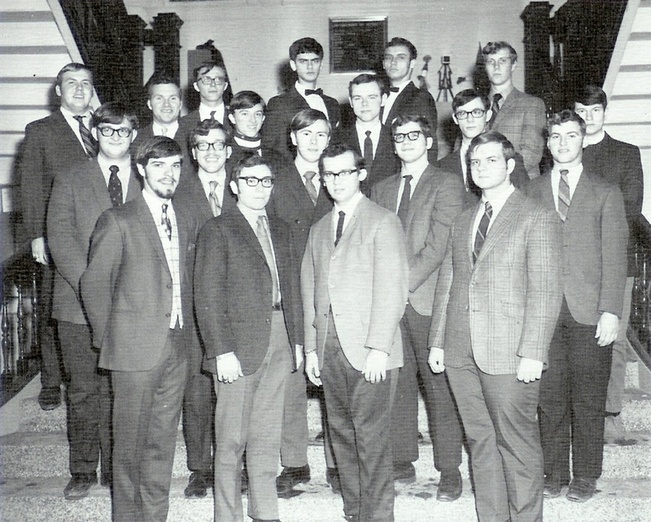 Founding Fathers of the Epsilon Phi Chapter are:

In the years that followed World War I, a movement developed among college and university bands, searching for some motivating force that would create a greater interest in band music.  This movement sought expression in an effort to develop good will, fellowship and understanding among bands and their members, and to recognize the value of dedicated leadership.  Seizing upon this idea, ten members of the Oklahoma A&M College (later to be known as Oklahoma State University) Band, led by William A. Scroggs and their director, Bohumil Makovsky, drew up a plan for a national honorary society for college bandsmen.

Officers for the local club were elected and William Scroggs was selected as president. With the local organization complete, a corporation was formed which petitioned the Oklahoma Corporation Commission for a charter.  The charter was granted November 27, 1919; and "Kappa Kappa Psi, Honorary Fraternity for College Bandsmen," was established on the Oklahoma State University campus with the local group being known as "The Alpha Chapter."

During the first year of operation as an honorary society the members were kept busy working out and adopting a national constitution, creating and developing the Ritual ceremony, designing the jewelry needed to provide distinctive recognition for the organization, and setting up plans for the expansion of the Fraternity. The Greek name and symbols, "Kappa Kappa Psi," were furnished by Dr. Hilton Ira Jones of the OSU Chemistry faculty, and assistance in the final organization was furnished by Col. F.D. Wickham of the OSU Military Department.

No person is so important to any organization as its constant companion, inspiration, and source of support. Such a man was Bohumil Makovsky, Director of Bands and Head of the Music Department at Oklahoma State University from 1915 until 1945. Affectionately referred to by all who knew him as "Boh," Makovsky provided the strength and encouragement needed by William Scroggs and those nine other bandsmen which saw them successfully through the establishment of a national fraternal society.

Founded by bandsmen for the band member, Kappa Kappa Psi was (and is) a tribute to the dynamic personality of one man. For around this personality there grew a core of student leaders committed to assist him in a program of developing the best college band with the highest performance standards possible. "Boh" was that man, and each incoming member of this Fraternity should be familiar with the man who was officially recognized by the Grand Chapter in Convention assembled as "The Guiding Spirit of Kappa Kappa Psi."

We, the brothers of Kappa Kappa Psi, believe that service to the college or university band program fosters responsibility, loyalty, and leadership; that a spirit of brotherhood is enhanced by the participation in a band program; that music is a universal language and truly the greatest of the arts; and that through fraternal participation, each member will strive for the highest.

Be it known that Kappa Kappa Psi, National Honorary Fraternity for College Band members, is an organization operating exclusively in the field of the college and university bands, and for the following several purposes: