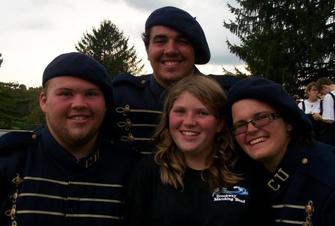 Justin Salada (far left) is a Sophomore Music Education Major with a concentration in Tuba, at Clarion University of Pennsylvania. Originating from Brockway, Pennsylvania he is a fairly locally known musician. He is currently studying under Dr. Stephen Johnson, the tuba/euphonium professor and chair of the music department. Justin participates in the following collegiate level ensembles:
Justin is a member of the Beta Nu class of the Epsilon Phi chapter of Kappa Kappa Psi. During his time as a membership candidate, he was elected as the President of his class. Through his commitment to the bands and service to the university, he became a brother of our chapter. He was guided through this process by his Big Brother, Curtis Michael Blauch, and was given the opportunity to guide his Little Brother, Stephen Francica, through that same process. He is a member of the David Stevens Family Line. As a brother, Justin has served us in the following capacities:
Every day, Justin reminds us to "Strive for the Highest" by his gracious and kind attitude. You will find him always in the Marwick-Boyd Fine Arts Center doing something to help someone. He would like all of his fellow brothers to remember that we are here for a reason and that reason is music. And through music we have formed one of the largest service organizations in the band world. So let us not act as those who are a secret society but share ourselves and our thoughts with other musicians. Oh and, "E-PHI, DO OR DIE, K K PSI"

Justin is also involved in the following organizations: